This week’s episode of the Firefighter Training Podcast we talk about entry level preparation, and preparation to be a fire officer.

This week on 60 Second Safety we ask if hiring practices could be a safety hazard.

This week Joe Starnes and Pete Lamb have teamed up again for a short chat about instructor responsibility. Take a look.

Yes it is true….sad but true. I am making this post because as of late there has been some confusion on social media about the TWO Chief Peter Lambs. I am doing this post so if either of us has confusion in the future we might be able to point or link back to here to this post to give folks a point of reference.

The confusion is also magnified because “the other” Pete started in Connecticut and then moved up to New Hampshire and Maine. I have worked in Rhode Island and Massachusetts so we are both from New England.

I started at a small fire district (Harris) in Coventry RI, went to Tiverton RI as Chief, Massachusetts Fire Academy in various roles including Director, and Chief in North Attleboro Massachusetts.

As of this writing in December 2014 I DO NOT have a Facebook presence, but I think the other Pete does, so that is a clue right away. If it is on Facebook it probably is not me. (That could change in the future.)

I also use these two images in much of my work.

If you have any questions please feel free to ask, and if I get sent correspondence for the other Pete, I will forward it along.

This week we have a fire inside a large warehouse recycling facility.

2.) What are the products that may be found here? How will this affect your operation?

3.) What is your plan for overhaul? How will this be accomplished?

4.) Based upon the size of the building are there any ventilation challenges?

5.) Besides normal structure fire precautions, are there any additional safety concerns here?

This program will look at multiple facets of leading the modern Volunteer Fire Department. The program will cover fireground operations to make you safer, company officer challenges and motivation tips and techniques, and departmental group and team building behaviors. The team of Instructors bring all levels of experience and ability into a comprehensive blend of knowledge, skills and experience to help members of all types from the newest member, to the seasoned veteran. 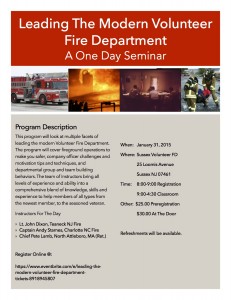 Instructors For The Day

Refreshments will be available !

This week the Firefighter Training Podcast looks at firefighter nutrition. What we eat is the fuel for our bodies and has a tremendous impact on both how we feel and how we perform.

This week 60 Second Safety is about Slowing Down our emergency responses, safely.

This week the Tactical Fire Problem is a warehouse adjacent or attached to a large store.

2.) What is your initial attack line and where does it go?

5.) Are the sprinklers operating or not?